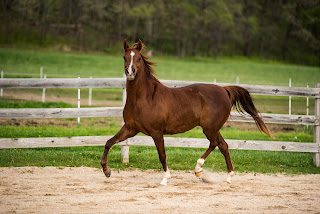 May has been somewhat of a busy month. While I keep hoping things will be simplified at work, they aren't quieting down. There are still significant supply shortages so I spend a number of hours each day trying to track down reagents, sort out ordering issues, and find alternatives to keep my laboratory trucking each day.

So, I'm late posting this, but it happens.

I had a chance to clinic with a well regarded "S" judge.

She was very patient with my somewhat feisty, red pony mare. She declared she knew how to speak chestnut mare. :)

One of my biggest takeways was committed to a decision once I made it. Once I made the decision to ask for the canter, to marry that decision, and to canter. Don't ask for canter, waffle on it, ask again, and waffle. It just irritates the horse.

Makes sense, but somehow I still manage to waffle.

One of my other takeways was how to approach and ride each part of a circle differently. She emphasized on how often horses will bulge out on the circle closest to the gate or exit and it's OK to have different aids or strength of aids depending where you are in the circle.

On the horse front, she did have me keep busy, which sounded very counterintuitive and difficult for me. I want to be a kind rider. However, my little red pony takes full advantage of that and either quits, inverts, or stops using her back. So "S" wanted me to go ahead and think about the strength of my aids. When she was being steady and quiet, think about being a 1 or 2 on a scale and when she was being looky or needed to be kept busy, to emphasize aids up on a 5 or 6 level. Not saying, she meant to be harsh on the horse, but in Chili's case, it ends up being more tug-of-war if I completely release rather than keep half-halting or keep her mind busy with soft hands and something to do rather than leaving her to her own devices.

So all in all, a good lesson, despite having to move inside halfway through as it started raining.

Our first schooling show of the season is next week so it will be a good barometer to see where we are at at and to gain more feedback. 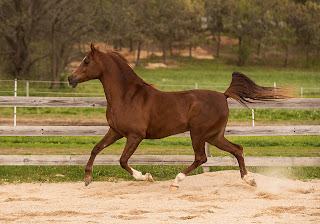