We Came, We Saw, We Survived

The show was quite interesting.  The positives included the fact that Chili hopped right on my friend's trailer at 10pm at night and traveled like a boss.  Another positive is that no one died.

Downsides was that it rained.  It was wet.  It was windy.  It was really, really cold.

I had the first ride of the day and Chili did well in her warmup.  Unfortunately, due to the first ride, I didn't have much time to expose her to the full sized dressage court and the scary judge's house at the end of the ring.  When I was trying to school her down there before I went into the ring, a runner shooed me off and told me I couldn't be down there.  OK...

So, we went into the ring and the geometry wasn't very good on the far end of the ring.  The halt was a bit of a sprawl and stare.

I then rode another mare Madison who was also not especially thrilled with the subpar weather conditions I was riding in, however, she did do her best to oblige.

She has been schooled in a more typical Arabian fashion with a tightly curled neck and martingale.  Whenever she got a bit anxious at the show, she would curl back and get tense.

However, I think she has great potential since she had a great attitude and a lot of try.  :)

After my two dressage classes in the morning, I retreated back under some shelter, trying to burrow under every blanket, sheet, and cooler I could find. 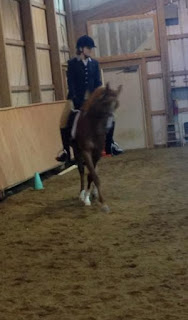 There was a tiny indoor about 60' x 60' (maybe) present on the property.  The management decided to move some of the later classes in this indoor because several of the classes were therapeutic classes and it didn't seem appropriate to subject those individuals to the miserable weather outside.

They also decided to move dressage trail, equitation, and suitability inside.


I rode Madison, the other mare, in equitation and suitability.  She did wonderfully and the judge kindly talked to us after the fact about my equitation flaws, namely the fact that I turn my toes out.  Not sure where I picked that up along the way, but feedback is very useful indeed! 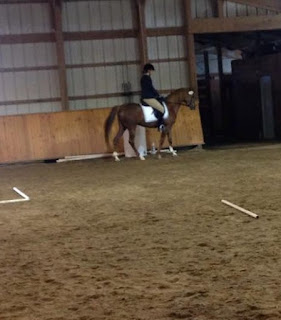 I then rode Chili in dressage trail.  It was a bit tricky because there were supposed to be 20 meter circles and such, which wasn't particularly easy in that small of an indoor, complete with obstacles.

A couple of our halts took place right over the trot poles.

But I'll say that Chili handled all of the obstacles well.  There were trot poles, an "L", turns on the forehand/haunches, halts, and variations within gaits.  A nice introductory for sure and she got third with some positive comments.

So overall, I consider that a win.  We came, we saw, we survived the coldest June horse show I've ever attended!
Posted by Semi Feral Equestrian at 8:02 PM 2 comments: