All in the Family

I like pedigrees on horses.  I see a pretty performance horse and I immediately want to know the lineage, the breed, and just about everything else.

I know that many folks only care about the performance of the horse in front of them and that "you can't ride papers".  That is certainly true, however, a pedigree usually offers a certain insight.  There are family traits that run strong.  Athletic ability can certainly be passed along, just as easily as the "X Factor" explains Secretariat's 22 pound heart.

There are lots of horses in my mares' pedigrees that I know what they looked like and their general performance abilities.

I like to collect photos.  Forget having family photos on the wall: I have hundreds of historical photos on my hard drive.


One missing piece has been more information about Donni's sire.

I did find that there was an ad in a magazine and a friend scanned the page for me.  This is the only photo I've ever seen of him.
Through my internet sleuthing skills, I knew the name of his former owner.  I set out trying to find a farm page with no luck.  I knew the name of the actual farm so I tried searching that.  I then tried matching the names up on Facebook and a name popped up that was in the correct vicinity.

Now how does someone send an email cold calling about a stallion from the early 90s?

I wrote a message, hit send quickly, and then attempted to forget in case there was some poor confused non-horse person on the other end.

Well yesterday, I got a response.  My message had sat in the "other" folder for a long period of time until she actually saw it.  She was thrilled to read the message and happily told me about "Dance" and his loving personality.  He was a member of the family and lived at her farm until he died in his mid 20s.

Athletic, sweet, gentle.  She described him as a "tent" horse where he certainly would crawl into a tent to live with his person.

So very reminiscence of the sweet personality his daughter has.
She asked for more information on Donni and her offspring.  Enthusiastic for photos, I can just imagine the person on the other line reliving the joy and happiness her grey Arabian stallion brought her.  "Dance" was family and in a way, it's all a great family reunion now seeing her stallion living on in his descendants.

Sometimes it pays to be relentless in learning more about pedigrees.  It isn't always memorization of sires and dams, colors, or physical characteristics.  Sometimes it's about meeting others along the way and expanding the circle of equestrian family.
Posted by Semi Feral Equestrian at 6:48 PM 1 comment:

As part of my 2017 goals (see previous post), I've been trying to get in at least one lesson a month.

This is seriously easier said than done.

However, a local dressage trainer ended up running a special on lessons in January which sparked my curiosity.  Her regular lesson prices are way outside my typical realm of being able to afford, but the special made it on the higher end, but more realistic.

So I ended up corresponding and found myself riding a very nice, large Warmblood mare named..."Mare."  She has a name beyond that but apparently is often is just called Mare.

I wanted to work on accuracy, my balance, and softening my hands.  I definitely ended up touching on more than that during the lesson.  It was nice riding a schoolmaster.

But one thing that was particularly interesting input was how crooked I am.  I know I'm crooked, however, I didn't realize to what extent.

Apparently while traveling to the left (counter clockwise), I always thought, OK, look in the direction of travel.  I drop my inside shoulder enough that if I look, it ends up actually putting more weight on the right seatbone.  Really counter-intuitive.  Then the horse bulges out, I end up in a pulling match on the reins, and everyone looses.

However, the coach had me keep my head straight and aligned with my sternum while traveling to the left.  I could look a bit with my peripheral vision, but not actually turning my body.  She made sure I put enough weight on the left seat bone and stirrup to turn that direction and sure enough, Mare became soft and obedient.  At one point, she had me riding with one hand behind my back, the other hand holding both reins quietly down on her neck, doing a posting trot at both 20 and 10 meter circles, working on increasing the weight in the stirrup to adjust the size of the circle in and out.

My circles to the right require me to actually twist a lot more through my body than I would think. I still have to struggle to keep thinking "back" and "up".

In the beginning of the lesson while just observing me, she asked if I knew what needed to be in alignment.  I said shoulder-hip-heel.  Simple mantra.  We all hear it.

Simple enough, but especially since having back issues, I've struggled a lot with this.  She asked me if I planned on actually having shoulder-hip-heel in alignment and I said "Someday."

"OK, someday in my life, maybe within the hour" I said, "Sorry, I'm a little cheeky."

But she had me try to adjust a bit of the way I was sitting with my pelvis, sitting up a bit further and surprising enough, dang, I actually looked like I could ride a well broke horse that's probably worth a lot more than my car .  ;)  The perks of a schoolmaster.

Other things she briefly touched on was trying to adjust the amount of tension I carry my wrists and how one hand always creeps upwards.  Really hand?  Why can't you stay where I want you too?

But in the end, I think it was well worth the time and money to get some useful input.  I find so many people are able to point out flaws, but there aren't so many people that can figure out useful suggestions on how to begin correcting these habits.

I did go back home with a few more useful tools in my toolbox and went to work trying to apply them.  Granted I ride alone, with no mirrors, but it felt better.  I put out the camcorder one evening and we really were much softer in the circles, especially to the left.
I need to work on the canter next, trying to maintain a certain level of softness, and to resist that strong urge to just curl forward which does absolutely no good to anyone.  ;)

But until then, I'll just keep going in circles, ruminating on a good lesson on a big bay horse named Mare.

Posted by Semi Feral Equestrian at 6:47 PM No comments: 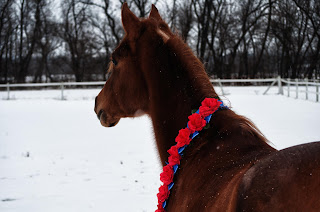 I've had dozens of posts ruminating around in my head lately.  Unfortunately, I don't like typing on my phone and often don't sit down at the laptop to get them into digital format.

However, I did finally want to write down my 2017 goals so they can be official.

*Take at least one lesson a month.  As a DIY, I rarely ride with instruction.  Part of it is time and part of it is financial.
* Improve my high school in training level dressage.  I am sure this will tie into goal #1.
*Trailer out to the trails at least twice this spring/summer season
*Be able to back said trailer like a pro.  Or at least less like a whiny person.
*Cross train twice a week, whether that is crunches, yoga, etc
*Blog twice a week.  I'll really have to settle into this one to get it done.  I have lots of ideas, but I think I"ll have to write and then queue them in order to have them released.

That's it.  Perhaps I'll break down further goals as things go along, but they will require some work!

What are some of your goals?  How are you doing so far this year?
Posted by Semi Feral Equestrian at 1:52 PM 2 comments: