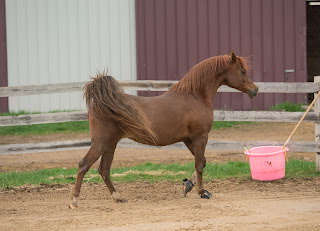 Some of our rides have been more exuberant at times about canter departs. I have probably permitted Chili too long to be a little too crooked in her canter, not take the right rein and not always use her hindquarters as she should.

So for a while, especially on the left lead canter, she would be a little too offended if I used too much left leg on her during the canter or careen into the canter instead and then any time I actually asked her to stay on the right rein, she would break.

My fault. I babied her because of so many past injuries and would just let her have a somewhat wild canter at times because I figured it was better than no canter and then coupled with my left sided weakness, I couldn't really insist on much better.

So, that's been a focus now to ask and slowly put together all the pieces and Chili thinks it sucks.

Canter forward in a quality gait on both reins while using her butt.

It's slowly getting there and we are chipping away at it. Winter it was a little bit harder because it was easier to maintain and have enough time to have a quality canter in the large arena and the indoor is good sized for the Midwest, but certainly not big enough for our liking, plus filled with spooky corners.

Last week, it warmed up to about 80 degrees F. Pretty warm for this area and despite it was kind of windy, I went ahead and rode in the big(ger) outdoor arena. Slowly been trying to put together pieces of a more quality canter and so I was happy that both ways, we cantered in a civilized manner and then on the left lead canter, which is typically her weaker direction, we made it about a lap and a half of the 200 meter long outdoor arena. We do have a ways to work on keeping up her conditioning, but considering a year ago she was injured in a paddock accident and it took until late fall to have an appropriate diagnosis, I can forgive her lack of condition.

My lack of condition, not so much. ;)

She behaved well with no lunging, despite having most of the week off, did well at the canter, and so we called it a day.

I noticed her saddle sitting a little bit differently than it did previously, so I also tried a different half-pad as I usually ride with a Thinline half pad with shims, but the last ride I just rode in a regular fleece half pad on top of my typical saddle pad and the sweat marks seemed to be better. I imagine as she continues to regain condition, we will keep tweaking her saddle fit. I took a photo of the sweat marks (thanks warm day!) and sent them off to the saddle fitter who agreed that we should probably try switching some of the shims and she could take a peek at the saddle later this month when she was in the area again.

I feel like I should end this post with some major takeaway or revelation, but the reality is that I'm just happy that I had the chance to ride my horse again, canter a good canter for more than a 20 meter circle, and then realize how dang lucky I am that I didn't lose her to that fence accident.

The sweat on our faces at the end of the ride was certainly worth it. Here's to hopefully many more.

Posted by Semi Feral Equestrian at 5:27 PM No comments: