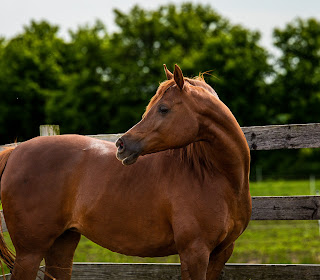 The past few weeks have been pretty busy. Some exciting upcoming news, but until then, it's just been work and more work since one of my coworkers left, so we're picking up her shifts.

But I was able to get the last slot for a clinic at my barn on Sunday afternoon after I finished work. The last two slots were in-hand lessons with a well regarded area dressage trainer and one of those individuals that's shown a large number of stallions for inspections and all of those things.

I first saw him showing some Half-Arabians for another trainer I know and I really liked his style and how effortlessly he showed the horses, so I was thrilled when my barn owner arranged for him to come up and teach. 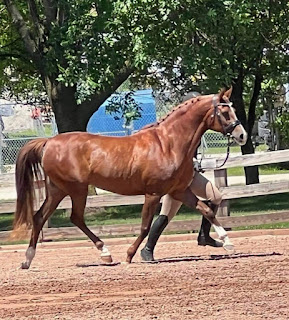 Screen shot of an in-hand photo from last month
I think everyone enjoyed the clinic day with K. He was knowledgeable and was able to evaluate our horses and give us some tricks to help best show our individual horses.

One thing he noticed with myself and Chili is that I run very close to the triangle and the cones and he wanted to run off of the cones, as in several feet to the left of the cones to give myself more time and a corner to raise the whip to help guide onto the long side for an extended trot. I was taking the corners more as a 90 degree angle and not setting my horse up for the most time to get into a bigger trot.

He also suggested folding my reins up into my right hand and just having my guiding whip in my left. Makes sense. Less for me to putz around with. Bigger points was to look up and to go for it. I have big enough strides, but I would often try and look back or down and then give my horse a bit of a "half-halt" in hand and shut down the expression of her gaits.

In the walk, he said I especially should hold my hand a little bit higher and a little loose so she could swing through her back more. I have a tendency to be a little tense on the reins since she can anticipate and break into a trot. K's suggestion was that he often will take his right hand and even just raise it and pet the horse a little while walking so they relax. There's no rule against petting them or being nice to them and this will emphasize the difference between the relaxation in the walk and then asking for a bigger trot just a moment later.

He also suggested always trying to get my horse's expression up since her neck is a little thick and lower which I know. I think I described her as a "potato".

On some horses, just asking them to look for the whip is enough or to poke them in the shoulder with the whip. Others may reach for his hand (especially if he's been hand feeding them in the paddock). Chili is pretty wise to most of these games and he suggested the magical thing of sand. Which apparently worked in the clinic. We'll see if we can keep it working at shows, but maybe I'll try and find novel things to school with and attempt to clicker train the reach up and ears forward and get it on cue. Wish us luck, lol.

Otherwise, sand in the show ring it is.

Other major takeaways from some of the other horses is don't back a horse into a stance. A small circle is better if you need to fix them since most horses will stand hocks closer together while being backed up. A smaller horse could have their front feet placed closer together in their open stance to appear a little bit taller. Sometimes less is more. Stop annoying the horse if the stance is "good enough". Some of the fixing can be done while the judge is on a different side of the horse.

Always look at the judge and move to the offside to show you are ready to start their judging.

What tricks or tips have you learned for in-hand classes?

Even though I've shown a lot, I haven't had an "expert" coach me before so I'm interested to see how these suggestions help!