Here is a short clip taken off my cell phone of some of the sort of things we have been working on at liberty.  I've been having hip and SI issues so riding has been difficult.

Here are some of the things we've been working (but obviously not perfected yet):

-Standing up and reaching for halter, which she already knew
-Turns on the haunches aka perhaps we will be able to do showmanship some day
-Turns on the forehand
-Bowing
-Lining up at liberty at the mounting block
-Bowing on the right leg, which is her off leg and a lot more difficult
-Sidepassing
-Touching the terrifying flag or anything else that flaps and makes her anxious

Any suggestions for other things to do?  I want to teach her to lay down, but my attempts so far have been unsuccessful.  She doesn't lay down often, so asking her to do it on cue isn't very simple.

Black and White and Shades of Grey

I was clicking through some video that I took while riding the other night.

As in took--I mean I set the camcorder on top of a jump standard, so it wasn't particularly focused and the lighting in the arena leaves a lot to be desired as far as image quality.

So here are the images in black and white instead. 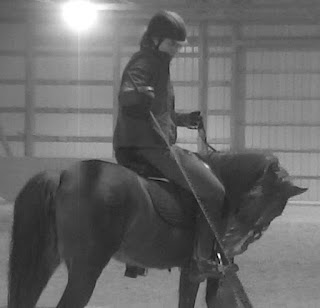 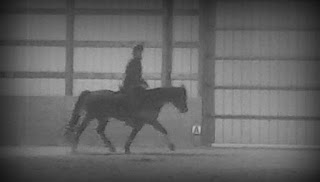 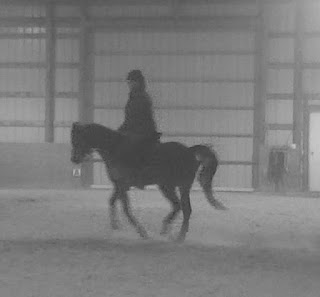 I have a handy dandy stick with the flag on it as seen in the first photo.  Chili is what I would call a noise-reactive horse.  She doesn't really like weird looking things, but weird looking noises particularly bother her.

This is unfortunate as I don't usually hear whatever weird thing is going on.  On the plus side, if we need to run away from a ticking bomb, she has us covered.

But back to the flag--the purpose of the flag was to be able to control and introduce a stimulus with a noise factor.  I originally began pairing the flag with a treat so that flag=treat.  Eventually, I established a verbal command of "Touch it", so she has to touch the flag for the treat.

She does some pretty impressive "carrot stretches" to touch the flag.

The other night was the first time I picked up the flag and rode with it.  Apparently carrot stretches still apply while in the saddle.  The goal is to engage "curiosity".  High fear animals often have high curiosity and I am hoping by engaging her curiosity in touching this flag that we can continue to establish a verbal cue to remove fear and instead seek it out instead and be reinforced for that behavior.  We shall see if it works out.

Training and working with horses is all shades of grey and not just black and white, right?
Posted by Semi Feral Equestrian at 6:45 PM No comments:

Last year, I spent St Patrick's Day in Ireland.  This year it is a cold, dreary day outside and I'm not traveling.  It is just above freezing with a gray unpleasant drizzle. 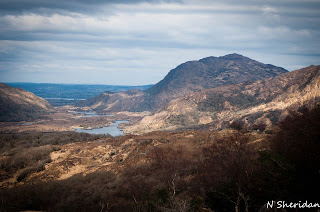 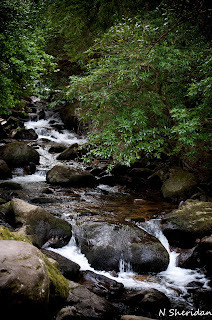 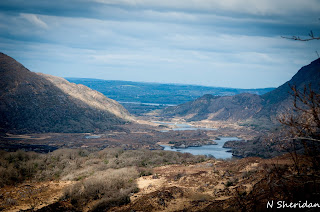 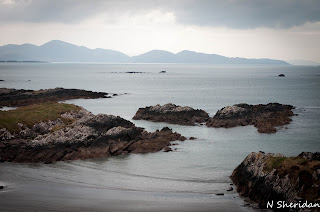 In a day where many people will be wearing green and drinking green beer, I'm just reflecting on a fantastic trip to an incredible country.  Friendly people, an incredible history, and more than just a few castles just about everywhere.  I'd recommend traveling to Ireland sometime and just immerse yourself in a country that's a joy to travel, beautiful, and just think of the history that shaped Europe and in ways, parts of the world.