I officially had my surgery two weeks ago and I have to say, I have been doing great.

I read a lot (too much) information beforehand and had quite frankly ended up terrified.  Some folks having more pain after surgery and I really was wondering I had signed myself up for something I would regret.

But two weeks into this adventure, I have no regrets at all. Tomorrow I return to work and I have to say, I am looking forward to it.

Today I met with my surgeon and he was able to show me images from the surgery and give a better explanation of what he found.  Essentially, he was much more conservative and decided not to do as much "reshaping" or suturing as initially indicated on my imaging. He did remove a bunch of torn labral material, but left another portion which, while torn, is still smooth and laying in the correct location.  His feeling as a high performance person himself, is that suturing or provoking that part of my hip would possibly introduce a problem where that wasn't actually the problem (but it certainly was evident on my imaging!).

The best part of my visit today was because I didn't have a lot of heavy hardware in my hip, I could be weight bearing and get wean off of my crutches, as long as I don't feel I need them to steady my gait.  Hurrah!

Hoping that I will be able to be in the saddle sooner than later.  I have a lot of plans hopefully for 2019!

Surgery on the Horizon 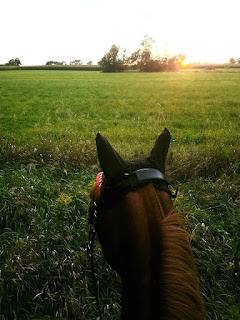 This past year has been one where I feel like I have been primarily whining, which really isn't my goal.  It's been a search for some answers with myself and tools to hopefully improve my riding.

One thing is my Ehlers-Danlos diagnosis.  The second recent thing that has been the diagnosis of a FAI and a labral tear in my hip.  Some people choose to avoid surgery, but after struggling with physical therapy and the pain getting substantially worse over the past six months or so, I have the surgery scheduled for this upcoming Monday.

To say I am anxious about it may be an understatement.

My surgeon said in the preop appointment that to expect four to six months out of the saddle.  I think these semi feral horses are going to be really quite feral by the end of that vacation, but hopefully some good friends will help keep them civilized.

Chili has been injured since September anyway with a large hematoma that is slowly going down, but was so large, she actually has stretch marks and butt wrinkles from it.  I am sure she appreciates the time off.

So the 48 hour countdown is on. Wish me luck and I am hoping to come back better than ever in 2019 in the saddle.

Posted by Semi Feral Equestrian at 10:05 AM 3 comments: