It's been a long time.

Probably way too long for anyone who may have previously followed by blog to still be around, but that's OK.

I have been here, doing my thing.  I often suffer from "too much on the plate" and then get stressed and frustrated when I ignore some aspect of my life and then ignoring it seems to be the best solution.

I'll see if I can touch base on some of the major highlights of the past year, but the Semi Feral horses are still here and mostly feral.  :)

I'm, as always, working on being slightly less feral one day at a time.

One goal in 2018 I've had is to try and develop a little bit better feel by riding a schoolmaster type horse. 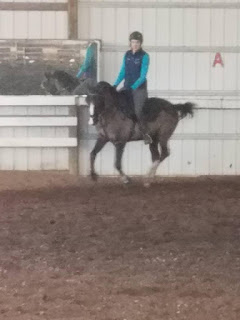 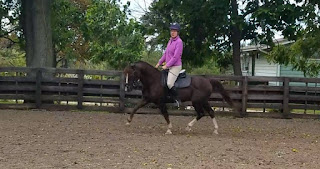 Montana is a pony sized Morgan stallion who has been shown through PSG.  I'm 5'11" so of course, in perfect logic, I'm now riding a pony who I think is 13.3 or so.

That's me above riding.  Obviously still much to improve :)

But it's been enlightening.  I own Arabians and riding a smaller horse means I have to be much more aware of my seat and aids in order to be most effective.  To ask for a good transition, I need to get out of their way and not inadvertently dump them on the forehand.

Previously, riding larger horses, I felt they could tolerate and handle some more ineffectiveness or instability in my seat than my little sport cars can.

I am also hoping to show Montana a couple times to gain confidence in the show arena.

Let's see how it goes!

Posted by Semi Feral Equestrian at 7:58 AM 2 comments: