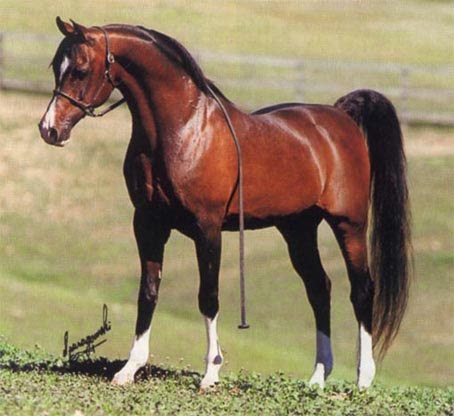 Khemosabi is another Arabian that the average person seems to know and recognize in a pedigree.  Rising from humble beginners, from a backyard in Whitter, California, he achieved national championships in halter and western pleasure and ended up being syndicated.  He sired over 1200 foals. 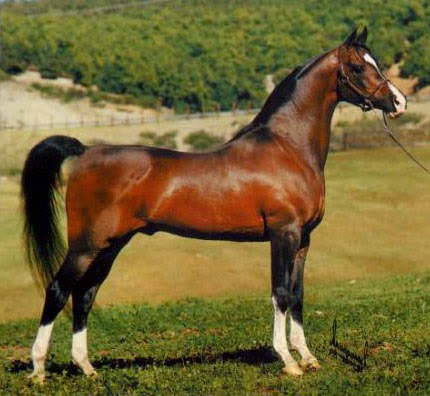 People often ask what "type" of Arabian is Khemosabi, referencing if he is Polish, Russian, or what have you.  I'd classify Khemosabi as an "American" Arabian as he blended a variety of bloodlines, stamping his get with his own unique look and style.  He had lines to Polish, Crabbet, and several crosses to the wonderful Babson stallion *Fadl.

Khemosabi endured years of wonderful publicity thanks to his breeders, but I think he is an enduring force in the breed because he sired his own unique look.  Part of this, I believe is his high whites and blaze.  White for many years (and to a certain extent now) was taboo in Arabians and sometimes thought as a sign of impurity.  Personally, I think it's a bunch of hogwash as the Crabbet imports certainly had a lot of white.

But Khemosabi somehow seemed to gloss over the fact that white was not "in".  His offspring had white and were generally, good minded, good moving individuals.  He sired offspring in plenty of divisions, but certainly in the western arena including western pleasure and cutting.

Khemosabi lived a long life and died at the age of 34.  He left a permanent mark on the Arabian breed and in many ways, I think he was a champion of how a backyard horse could rise to stardom.

He had his pros and cons in the breeding shed of course.  But his offspring have proven quite versatile and for a good temperament and work ethic, many people will attest that the Khemosabi bred Arabian is certainly an "in your tent" personality.

Breyer even immortalized this champion. 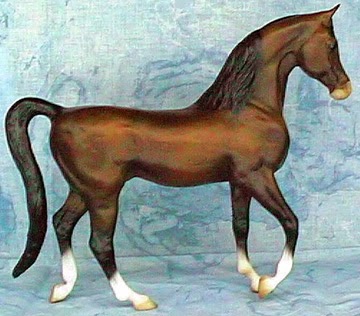 Any thoughts on Khemosabi?  Questions?  Have you ridden or owned a Khemosabi bred Arabian?
Posted by Semi Feral Equestrian at 7:47 AM