I'm a few lessons behind, oy.

I've managed to squeeze in a few lessons the last few weeks. As my work life continues to crush me, my once weekly lesson seems to be at least an encouragement to get in the saddle and forget about work for an hour.

My most recent lesson was one that was much more of a struggle. Chili was a little offended at the request to work on a smaller circle, maintaining bend, and accepting my inside leg. One of the things I struggle with is using my outside rein properly and riding more leg to outside rein. Chili is not entirely sure about this whole idea and upping the game plan. The last ride, she would just suck behind my leg while I was asking her to bend softly around it.

My instructor suggested asking her to bend properly off the leg and then if she sucked back, showing her the bend by cheating a bit by using the inside rein. If she complied and did as we suggested, then I rode her forward and let her move out as she wanted and waiting out the drama if she wanted to resist the contact, suck back, or any other bit of her antics. In some ways, she is a bit of a pony and my coach laughs and said she had to go through her rolodex of evasions before settling down and realizing the actual work was easier than the evasions.

One of the things I am guilty of is while she is often fussing, I have historically fussed back. More leg, adjusting the reins too much, or something similar and that would just feed into a cycle where Chili would fuss more back. Doing less is so much harder than doing more!

One of the previous lessons I think was one of Chili's favorites as it was starting to compress and lengthen her gaits. I am not always 100% convinced that Chili won't use her canter for evil once we teach her to lengthen much more in the canter and as she builds up strength, but trot work is always good too. 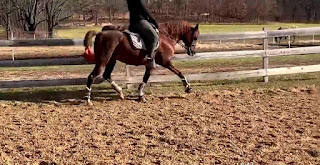 The suggestions were very simple ones, but always good to have the feedback as we were going along. Compress (usually on the short sides) and then work on building up a lengthen on the long side and finding the sweet spot in where she can still maintain strength and balance without running away. I do always have to remember that she is coming back off of a series of injuries and for myself, I need to figure out how to precisely balance and clean up my aids to communicate lengthening compared to a change of gait, since I am so much weaker on my left hip and calf than my right. It all seems to come back to using my core and seat aids to clarify my intentions! 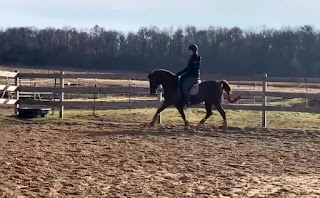 Chili seemed to enjoy this work much more than all of the stupid tight circles because she is so much tighter on one side of her body as well, but it's all a balance between the fun things and the physical therapy for the both of us! 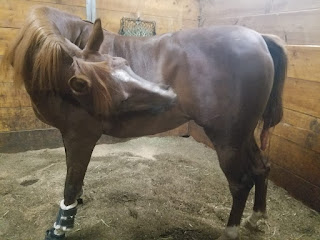 I did find out that the national championship horse show has qualifications waived, so here's to setting lofty 2021 goals and to see if I can put myself (well ourselves) together enough to warrant showing on the national level at this horse show. She already has four national titles in-hand. Should probably work on fulfilling some of that potential now.

Twenty twenty has been such an obnoxious year that by hopefully setting some lofty goals, I can maintain the drive to a better 2021!

Anyone else setting lofty 2021 goals or still planning on sticking close to home?

Posted by Semi Feral Equestrian at 10:01 AM